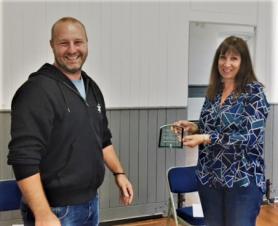 Stoney Stanton Parish Council are proud to award Julie Mould-Cook with an 'Outstanding Service to the Community Award'.Julie was thanked for her tireless work with the Good Neighbour Scheme, the Stoney Stanton Litter Pickers, her volunteering at Stoney Stanton library, her fundraising efforts and recently working with Calor to reduce litter...the list goes on.Julie you really are an asset to the village... Read More » 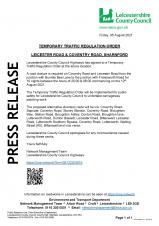 TEMPORARY TRAFFIC REGULATION ORDER LEICESTER ROAD & COVENTRY ROAD, SHARNFORD Leicestershire County Council Highways has agreed to a Temporary Traffic Regulation Order at the above location. A road closure is required on Coventry Road and Leicester Road from the junction with Bumble Bee Lane to the junction with Frolesworth Road for 10 nights between the hours of 20:00 & 06:00 commencing on... Read More »

Leicestershire County Council have recently made some changes to the way customers can now contact us.

The Leicestershire County Council Customer Service Centre (CSC) has introduced a new online enquiry form which can be accessed via our website or here. 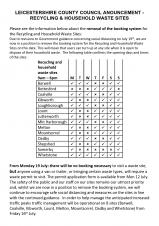 The LCC waste sites will be reopening on the 19th July 2021 to regular hours with no bookings required.

LITTER BINS TO INCLUDE DOG WASTE 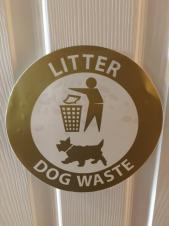 Blaby District Council have advised you will soon be seeing these labels on all standard litter bins around the village - meaning that these bins will accept dog waste.This should hopefully prevent overspill from the dog waste bins and the service will remain at twice weekly collections. The bins will be monitored and reviewed going forward.

After receiving more than 85% backing from local residents and approval by Blaby District Councillors, the Fosse Villages Neighourhood Plan has been adopted.

KEEP BRITAIN TIDY EVENT - THIS SUNDAY 9.30-11AMSTONEY STANTON LITTER PICKERS ARE DOING A LITTER PICK THIS SUNDAY, THEY ARE MEETING AT ST MICHAELS CAR PARK BEFORE 9.30AM.IF YOU WANT TO BE INVOLVED - THEY WILL SUPPLY BAGS AND EQUIPMENT.THANK YOU

Notice for Vacancy of Councillor 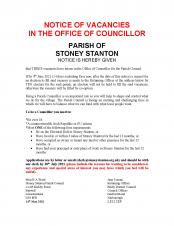 NOTICE IS HEREBY GIVEN that THREE vacancies have arisen in the Office of Councillor for the Parish Council.

If by 4th June 2021 (14 days excluding Dies non, after the date of this notice) a request for an election to fill said vacancy is made to the Returning Officer at the address below by TEN electors for the said parish, an election will not be held to fill the said vacancies,... Read More » 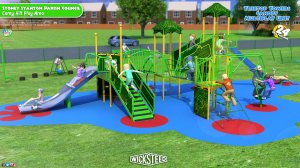 Exciting new addition to Carey Hill Play area (this item will replace the pirate ship), the funding was confirm yesterday and we are working with Wicksteed to get the item in as soon as possible.

Please be aware that any item not placed inside the recycling bins will be classed as fly-tipping and BDC have now evidence of names and addresses of boxes left on the paved area.Please ensure you recycle correctly, thank you.